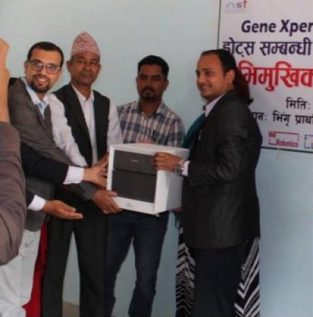 
On 12th April 2019, BNMT held an event in Pyuthan district to mark the official handover of a new GeneXpert machine to the district health office. Dr Maxine Caws and Raghu Dhital were delighted to represent IMPACT TB at the ceremony and were joined by the Chief of the Pyuthan District Health Office, Mr Bishal Subedi, together with his dedicated team at Bhingri Health post.

The GeneXpert machine tests for tuberculosis. It can find out if a person is infected with TB, and also if the TB bacterium of the person has resistance to one of the common TB drugs, rifampicin. A person suspected of having TB needs to give a sputum sample, which the district health care worker then places in a small tube. From the tube, the sample is fed into the machine, and then biochemical reactions are started to see if the sample contains any TB bacterium. If there are TB bacteria in the sample, the machine will detect their DNA and automatically multiply it. This is important to detect if a TB bacterium has developed resistance to drugs. The test is very quick and only takes about two hours. This is much faster than the other TB tests, which usually take at least a few days.